Since January Sustrans officer Tim Warin has been talking to children, parents and teachers about their experiences of walking and cycling around Dulwich. He's found lots of different approaches; one local dad used a 'Triple' to get his children riding on the roads.

"As the new Sustrans Bike It Plus Officer working in schools in Dulwich, I’m increasingly interested in how people get to school and why. When we ask, around 50% of young people would like to be able to ride to school but only 2% do. As is often the case when you’re young, life is unfair and there’s normally a pesky parent standing in the way of all things fun.
So I was pleased when I got to meet someone who has been doing the school run by bike since the day his youngest started primary school. His son needed wooden blocks to reach the pedals, and not just any pedals, because Angus Robertson and his family ride to school on what he calls a ‘Triple’, a three person bike with a grownup at the front, very closely followed by two small companions. 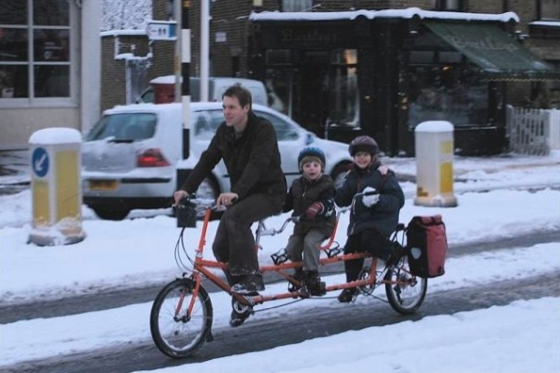 Angus is no stranger to unusual bikes as he runs London Recumbents, an organisation that hires and sell a plethora of the most amazing bikes I have ever come across. Whilst I was sent off to enjoy riding a ‘banana bike’ that uses your legs to steer and places you millimetres from the ground, Angus set to work wheeling more unusual bikes out the shipping containers that house their collection.
When I got back I was confronted by a small army of mad contraptions that not only allow people with disabilities to enjoy riding bikes, but also allow a very different view of cycling to the MAMILS (middle age men in lycra) on road bikes that are often the face of riding. 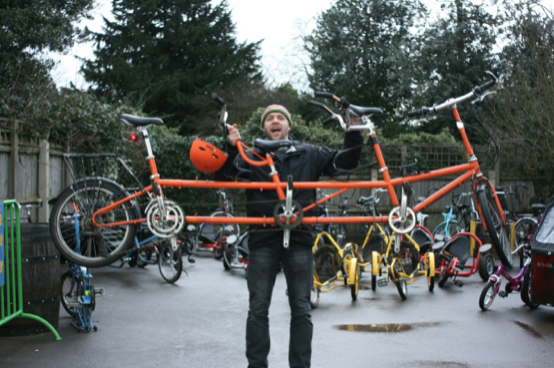 It’s no surprise then that Angus has found a bike that makes riding by road to school accessible and fun, even for a three year old and for local drivers – Angus often raises a smile. One of the problems with wrapping kids up in cotton wool is that when they do get to an independent age, they don’t have the skills they need to ride on the road. Riding on the triple has given Angus’s children plenty of experience of being around traffic and understanding cycling on the road and his eldest son has now detached and is riding his bike in Dulwich independently."