Amy and I attended a Public Policy Exchange Symposium on boosting cycling activity and improving safety on Thursday 16 March. Below, I have attempted to share a little of what we took away from the day.
The morning commenced with an introduction for the Chair, Adrian Lloyd, who is Associate Director of Phil Jones Associates and has had over 20 years consultancy experience in developing strategies and infrastructure to encourage walking and cycling.
Roger Geffen, Policy Director of Cycling UK was first to talk. He gave a brief outline of Cycling UK’s work and then went on to talk about attracting funding and support for local cycling. He gave details about the exiting Cycling Walking and Investment Strategy (CWIS) which is a Government strategy to create a walking and cycling nation through planning, investing and building infrastructure to generate a behaviour change with the ambition to normalize walking and cycling by 2040. He then went on to discuss the need for protected spaces and other cycling road safety initiatives as well as a need for national design standards for active travel.
Next to speak was Richard Owen, Operations Director of Road Safety Analysis. He clarifyed the statistics behind safety in numbers for cyclists in England and demonstrated the relationship between cycling risk and cycling levels. (The cycling exposure or level = number of cyclists per 1,000 population and cycling risk = proportion of casualties out of cycling exposure.) Cities where there was good infrastructure and high levels of cycling i.e. Cambridge and York had low levels of crashes whereas cities such as Liverpool and Bolton which have low levels of cycling and lacking in infrastructure have more accidents. These statistics help inform considerations when designing cycling strategies.
Andy Summers, Cycling Strategy and Planning Manager for Transport for London, gave a very interesting presentation about promoting the benefits of cycling and highlighting the advantages of cycling for our health, the environment and the economy. London’s population is set to increase by 2030 to 11 billion people with a large increase in traffic congestion. 19.8 million trips are made by London residents each day and 13 million of these are by motorised modes. 8.17 million journeys could potentially be made by cycling which would counter the future traffic increase due to population growth. It would also help the promotion of local business, global investment from companies who admire the new London cycling infrastructure, not to mention the enormous health benefits with exercise as pollution reduction and cost reductions to the NHS for treating illnesses such as type 2 diabetes, heart disease and depression as well as many other ailments.
Andy advised when tackling the misconceptions or myths about negative impacts of local cycling infrastructure changes or schemes it is important to have statistical analysis, images and evidence and be able to monitor and benchmark behaviour changes with a baseline. It is more helpful to call schemes ‘healthy streets’ without such an emphasis on cycling and more on the overall positive environmental impact of the change to the community. Andy kindly shared the TfL document, 'A Better Southwark' with us and it is available to download here.
After lunch Dr Robert Davies, Chair of the Road Danger Reduction Forum, gave a talk about close passing policing and the policing we need. Close passing policing was introduced by the West Midlands Police in 2016 who are and award winning Police Force for their education of motorists about the safe width for overtaking clearance of 1.5m. This is helping to educate and inform a cultural change about the need to consider cyclists as road users. He explained there is a need to challenge the background assumptions of a car-centric culture i.e. driving is seen as normal and cyclists as a problem or hazardous.
Dr Robin Lovelace from the School of Geography, University of Leeds, demonstrated the Propensity to Cycle Tool (see www.pct.bike), a nationally scalable interactive online mapping application (Lovelace et al. 2016). This tool models sustainable transport uptake and visualizing transport futures.
Xavier Brice from Sustrans showed us, with his presentation, the positive impact of community engagement, individual behaviour change and changing the built environment to the benefit of local communities with sustainable travel initiatives. By working in partnership with the community and empowering individuals to have an influence in local infrastructure issues, it can create higher cycling and walking, improve safety,  reduce traffic and enhance the local environment.
Last to speak was Dr Steve Melia from the University of West England. Steve is a Senior Lecturer in Transport and Planning. His talk was about creating an environment which encourages cycling, redesigning roads, streets and communities. He felt the key principles of infrastructure in successful cycling cities (and countries) were: Effective three way segregation on main roads with priority for cyclists over side roads. Filtered permeability. Joined up continuous networks. Consistent design standards, continuous improvement replacing ineffective compromises.
As you can see from the abundance of information provided during the day, there was much discussion and sharing of information. Amy and I left having found the day fascinating and came away full of ideas, interesting material and statistics that we hope we can put into good use with Dulwich and Herne Hill Safe Routes to School initiatives. 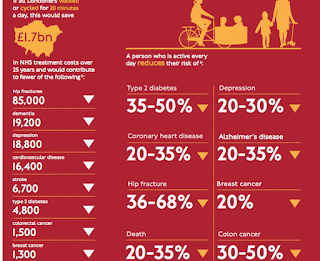 Highlighting the advantages of cycling