"You don’t have to hang around for long on some of the quieter roads around Dulwich in the morning or afternoon to see bike riders of all ages pedalling their way to school, often with a parent trying to keep up! There seem to be an increasing number of families in Dulwich using bikes to get around and I wanted to learn more from someone who regularly rides to school with children in tow.

I spoke to Marylène, a parent of two who started cycling with her family last year when her children were 8 and 10.  After swapping stories about family bike rides in France and the joys of being a big family unit pedalling through the countryside, this was obviously a family who knew a thing or two about being out on their bikes. When their children got to Years 3 & 5 it was time to start using pedal power to get to school. 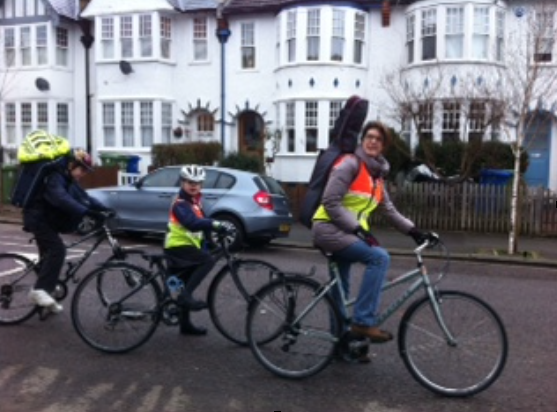 I normally hear about parents being pestered into riding to school with children, so it was interesting to hear that it was Marylène who instigated the change, partly because as she has to do the journey twice it reduces the time it takes her to get to and from school by a third.

Jumping on bikes to get to school wasn’t something the family did without thinking about it and it was very useful to hear about what steps they had taken to make the journey scenic and safe.

Marylene’s family live a bit less than the UK average of 1.5miles from school. When they walk it takes 15 minutes along the busy Half Moon Lane.  After a bit of investigation and scoping out the local area, they have found a much quieter route and although it adds around a third of a mile to their journey, it has the benefit of taking in a quiet cul-de-sac and an off road cycle path.

When they first started cycling a year ago they took to the pavement whilst building up confidence. Both children have been riding bikes at the Herne Hill Velodrome as well as on holiday for several years, but the school run was their first real taste of cycling on UK roads. They have left the pavement behind and progressed on to the road now, with mum leading the way and the two children following, getting invaluable experience and learning how to be safe on the roads under the watchful eye of someone who has been cycling for longer. They aren’t overly dogmatic about using their bikes – why bother when it’s pouring down with rain?"

This is the second in a series of guest blogs by Tim Warin, the Sustrans Bike It Plus Officer who is keen to help more parents and children cycle to school. If you would like more information, please feel free to contact him: Tim.Warin@sustrans.org.uk.