This weekend saw 2017's Landor Links 'Sustainable Transport and Public Health' summit in Bristol which I attended on behalf of the SRS forum.

My arrival in Bristol coincided with Storm Doris' and the city tour, led by Jessica Read (an engineer and urban planner working on 'healthy cities), was a somewhat blustery start to proceedings!

The tour started with a simple question; how many of us had known anyone who had died before their time from heart disease? Or cancer... or dementia... or a respiratory illness? Coronary heart disease is one of the biggest causes of premature death, yet an active lifestyle  reduces the chances of having a heart attack by 30%. It seems a no-brainer to suggest we should all be walking and cycling on a daily basis, yet the reality is that many of our roads simply aren't safe enough for our most vulnerable citizens.

The biggest cause of death of children aged 10-18 is from road traffic accidents.  Read highlighted the fact many parents don't feel safe enough allowing their child to walk on their own to the shops, and statistically, they are right to be worried. It is much riskier for a child to cross the road on their own in the UK, than it is to drive them where they need to go. Yet, walking is a habit and if children don't grow up seeing walking and cycling as 'normal' modes of transport, they will be unlikely to choose to do so as adults.

And equally, elderly people surveyed reported that the threat of being knocked over by a cyclist was enough to deter them from walking even short distances, despite the fact that walking, which maintains bone density and muscle mass, would actually reduce their risk of falling.

Read's point was that we need suitable infrastructure for pedestrians and separate infrastructure for cyclists. Segregated bike lanes  keep faster moving bikes on the road, away from walkers and safe from traffic, while clear, safe crossings are essential in order to make walking as attractive as cycling.

Making people feel invited to walk or cycle was a point picked up again and again over the two days. References were made to Lucy Sauders' 'Healthy Streets' approach and lots of inspiring global case studies were shared, proving it is possible to make huge changes, such as those made by Mayor Bloomberg's team in New York.  These transport case studies were presented alongside presentations from public health experts, including the World Health Organisation's Francesca Racioppi and Public Health England's Dr Ann Marie Connolly, on the benefits of active travel on mental and physical health, as well as of the disbenefits of poor air quality and lack of exercise.

The summit rightly raised many concerns about the future health of our young people. It does seem like an insurmountable challenge at times. However, there was much to be positive about; Solihull Council seem set to follow the Healthy School Streets model adopted in Edinburgh and Camden and hearing the team at Living Streets speak about their work across the country was inspiring.

However, the conference left me in no doubt that Safe Routes to School must do all it can to support fellow organisations campaigning to improve road safety.  The 20's plenty campaign has been hugely successful across London and is making a real difference in Southwark.  We will continue to support the 10% by 2020 campaign, as proper investment in cycling and walking infrastructure is needed if we want to build a future in which our children can walk to the shops on their own. Safely. 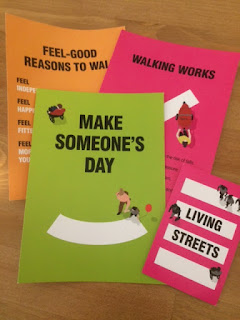 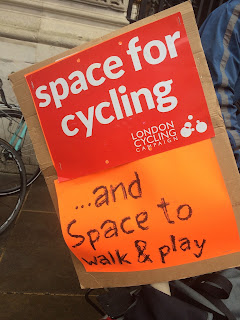 The 'Stop Killing Cyclists' campaign group held their '10 by 2020' march to the treasury on Saturday 11th February. The event was also a vigil for the three cyclists killed on London's roads that week and a very poignant statement from the husband of Anita Szucs, who was killed in an apparent hit and run, was read out and the dangers of poor air quality were emphasised alongside that of road safety for both pedestrians and cyclists.

Wheels for Wellbeing is an inclusive cycling charity based in Herne Hill (using the veldrome for all ability sessions) and we are vocal in our support of their work.  Abigail Tripp, one of their team, also spoke at the event and we were extremely saddened to hear that she has been severely injured in a cycling accident earlier this year. We wish her a swift recovery and wish to thank her for sharing her experiences with us at #10by2020.

On a more positive note, we would like to think that the commitment made by Edinburgh Council to allocate 10% of its transport budget to improved cycling and walking infrastructure is an exciting move. Edinburgh Council's 'School Streets' scheme has already set a precedent in London as has now been taken up by one school in Camden and another five more in Hackney are promised (and who knows, one day perhaps, even Southwark?)  Let us then hope they can set another excellent example with their commitment to increased infrastructure spending and that this will indeed lead to safer streets for all. 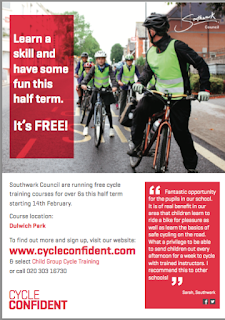 There are many events for families interested in active travel this half-term.  Today (Saturday 11th February) sees the Stop Killing Cyclists vigil and family-friendly march, calling for increased spending on walking and cycling, following UN recommendations. The Southwark Cyclists will be leading a guided ride from Peckham Square for anyone unsure of how to ride into the National Gallery, where the event begins.

Throughout the week, Cycle Confident will be running free Bikeability courses for anyone aged 6  and over in Dulwich Park.  To sign up visit www.cycleconfident.com.

Herne Hill Velodrome is running their children's cycling sessions throughout the week and the Lee Valley Centre offers Athletics Master classes as well as track or mountain biking taster sessions at the Velo Park.

Brockwell Junior Park Run is open for all 4-14 year olds looking to get PBs on 2km courses.  The next one will be Saturday 19th at 9am.

Equally, if anyone's on the lookout for a new bike, the London Bike Show is on from Thursday 16th.

There will be stalls from family cycling specialists including London Green Cycles, Isla Bikes and a 'Street Velodrome' with children's team cycling competitions for 3-11 year olds and individual competitions for 12-16 year olds. Enter online here.
Enjoy!