We are delighted that Southwark Council wants to improve the junction of East Dulwich Grove/Townley Rd/Green Dale. The plans and consultation are on the Southwark website and the consultation is open until 12th December. Please let Southwark know your ideas and comments: chris.mascord@southwark.gov.uk.

Update: We understand that responses will be accepted until 19th December (as reported by Cllr James Barber to the East Dulwich Forum). We hope Southwark will consider carefully and share publicly the comments, research, ideas and suggestions which have been put forward as part of the consultation, in order to ensure the best possible scheme for children walking and cycling to the many schools in the area.

The new design is a step forward for safe, active, independent journeys to school, making the roads more friendly and giving space and time to cross without feeling threatened. The thinking behind this sort of redesign is described in Southwark's draft Cycling Strategy: "We have a vision that cycling will be for the many in Southwark, not just the few – the natural choice for getting from A to B - with attractive routes away from large vehicles or fast moving traffic. We want to prioritise cycling, and reallocate road space to cyclists and pedestrians." 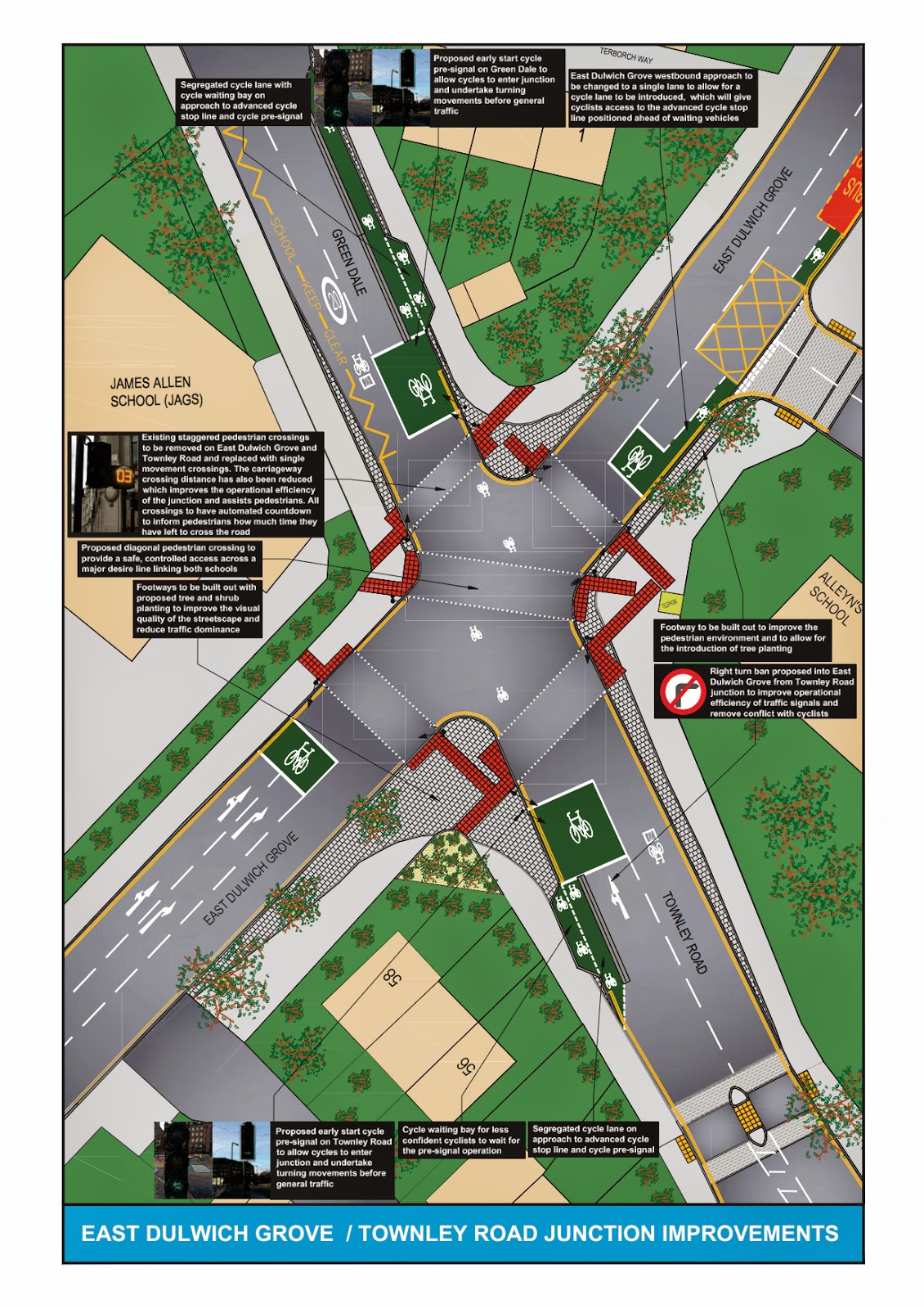 This junction is particularly busy during the school run as it is immediately in between two large schools. Despite supervision from two lollipop people at school run times, getting between the two schools at opposite corners of the crossing is perilous and uninviting, with pedestrians having to wait several times including on the caged 'refuge' in the middle of the road. The situation for people on bikes is no better, with several lanes to clear while holding your nerve against cars trying to turn across your path. This junction is used by thousands of children and their families on their way to and from local schools, and has been under scrutiny for years.


We support junction improvements for the following reasons:
With more people friendly designs, the choice to walk, cycle and scoot should become more attractive. We hope that more people will choose to leave the car at home, especially at school run times.

It is clear that the detail of implementation will affect the scheme's success - for instance the method of segregation and the timing of the light phasing are key to making this work well for everyone. We hope that Southwark will consider carefully all responses to the consultation and work with local stakeholders on the details to ensure that the scheme really does provide an attractive choice of active travel even for those who do not let their children walk or cycle to school at the moment. For instance we would want to ensure that the width and capacity of any cycle tracks are maximised for family-friendly inclusive cycling for all types of people on all types of bike, and that the design avoids the problem of 'left hooks' where a bike going straight on is overtaken by a car turning left.

Please support improvements for active travel at this junction by emailing Chris.Mascord@Southwark.gov.uk, or responding to the consultation online.